Chinese movies have always been a favorite of many people because the story of Chinese films is very different. You get to see action, fantasy, comedy, and many things together in the same movie in Chinese films. Here you will find the 5 best, most popular Chinese TV dramas of all time in Hindi Dubbed. If you watch Chinese  TV Dramas, then you will know how tremendous they are, but if you have not yet seen the Chinese TV Dramas, then you must watch them once.

You must have seen many Hollywood web series and movies in Hindi and all those Hollywood web series are very amazing but Chinese TV dramas are not less than them. The most important thing about a Chinese film and dramas I think is that if there is a serious scene of the series going on and you see it getting serious, then between those same serious scenes, they suddenly put on comedy, And you’re forced to laugh there.

So if you want to watch a fantasy drama comedy and a very good story, then you must watch a Chinese TV drama.

So, Today I am going to tell you about 5 Chinese TV dramas here, which you can enjoy by watching in Hindi.

Martial Universe is a 2018 Chinese television drama based on the novel Wu Dong Qian Kun by Tiancai Dudou. This Chinese fantasy drama has been written and directed by Zhang Li and in this series, you will see actors like Yang Yang, Zhang Tianai, Wang Likun, and Wu Chun in lead roles. The story of the drama is about a man named Lin Dong who sets out on an adventure to discover his powers and He meets two vastly different women in Ling Qingzhu and Ying Huanhuan on his adventures and gets romantically entangled with both. And when Lin Dong comes to know about his powers, he and his friends get out to fight a devil. In this series, you will get to see a very good Story, suspense, mystery which will hold you till the end of the series. This drama has a rating of 7.5/10 on IMDB. You can watch this Chinese TV drama on MX Player in Hindi for free.

2. My Girlfriend Is an Alien

“My Girlfriend is an Alien” is a Chinese fantasy sitcom drama. The story of the film is of an alien girl who is from Cape Town Planet and she comes on Earth and the President of “Future Group of Companies” who gets heavily injured by a car accident and of whom she saves life by putting her life in danger. The show depicts an intergalactic romance between alien girl Chai Xiaoqi and Fang Leng, an overbearing president. In this drama, you have seen Thassapak Hsu as Fang Leng and Wan Peng as Chai Xiaoqi an ‘Alien Girl’ in the lead role. This drama has a rating of 8.3/10 on IMDB. 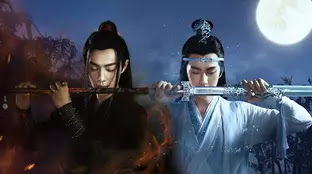 The Untamed is a 2019 Chinese television drama adapted from the xianxia novel Mo Dao Zu Shi by Mo Xiang Tong Xiu. The series follows the adventures of two soulmate cultivators Which are named Wei Wuxian and Lan Wangji and they both have some superpowers., who travel to solve a series of mysteries that link to a tragic event in the past. And whatever twists and turns they face in solving that mystery, you will find it very tremendous to see. This drama has a rating of 9.1/10 on IMDB. In this drama, you will get to see Action, Adventure, Comedy, Drama, Fantasy, Horror, Mystery.

To Be a Better Man is a 2016 Chinese Romantic Drama television drama directed by Zhang Xiaobo and produced by LeEco. The story of the drama is about a man named Lu Yuan who goes to America because he wants to be a big chef. But one of his friends dies in a car accident and his friend owes his daughter the responsibility to Lu Yuan. After which he comes back to China with his friend’s daughter. And there he wants to complete 3 works, after this, you have to see in the series which are those 3 works and whether Lu Yuan can complete them or not. The rating of this drama is 7.8/10 on IMDB.

5. The Love by Hypnotic

The Love by Hypnotic is a 2019 Chinese Comedy, History, Romance television drama directed by Li Yang and produced by LeEco. The story of this series is of Prince Li Qian and Princess Li Mingyue, both of which belong to different kingdoms. Prince Li Qian lost his mother at a very young age and falls ill due to this shock, but when he recovers, he has forgotten all his memories And they are told that their mother’s death is due to a dangerous disease. And now after growing up, Prince Li Qian is married to Princess Li Mingyue but they both don’t like each other. Now you have to see in the series whether they both like each other or not. This drama has a rating of 7.7/10 on IMDB.

So friends, how was this Hindi Dubbed Chinese dramas list tell us in the comments and I will keep updating this list as soon as a new Chinese drama will be released in Hindi.